HyperCard influenced some of today’s most well known programming languages but most people today have never heard of it. 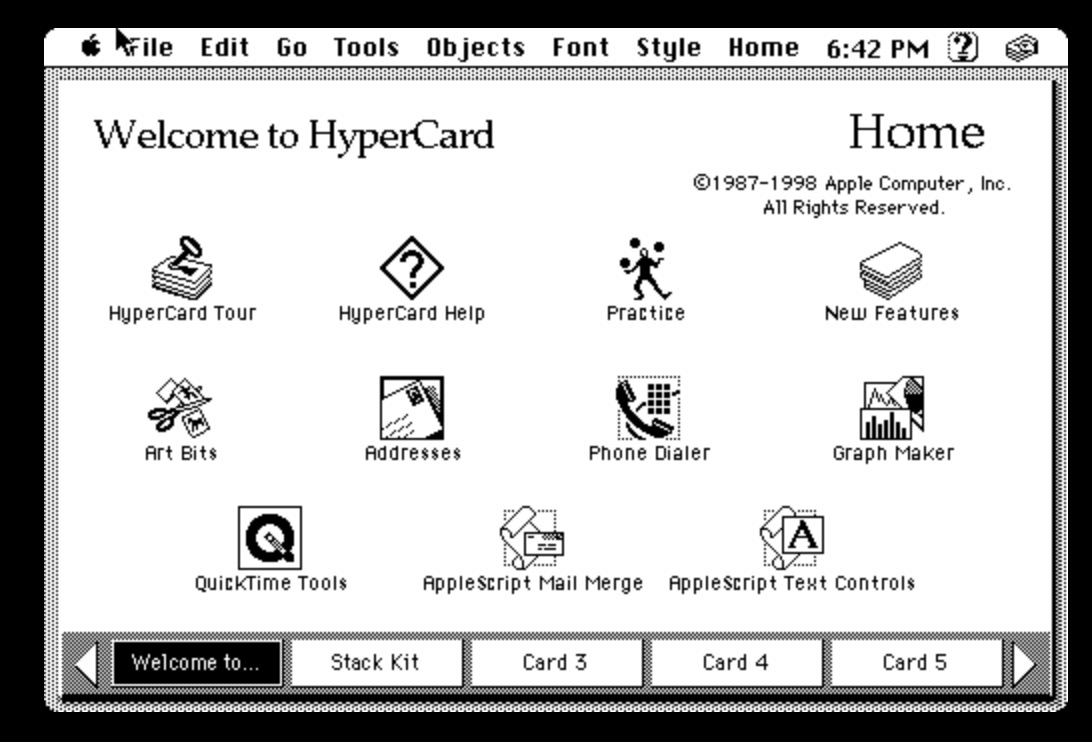 Last July, Samuel Arbesman wrote about forgotten software that inspired our modern world and told the story of Apple’s HyperCard. The software and dev kit was made for Apple Macintosh and Apple IIGS computers and predated the World Wide Web as a hypermedia system. Computer engineer and designer Bill Atkinson brought HyperCard to life in 1987, calling it “an erector set for building applications.”

Simply put, you could build your own software using HyperCard, with each program made up of “stacks” of “cards”. Each card could contain text and images, as well as interactive elements like buttons, with the ability to interconnect between other cards. Think of these stacks as rudimentary websites of sorts that exist entirely on a single machine, with each card as a page.

HyperCard used an object oriented language called HyperTalk for data manipulation and the interface and used syntax that was easy for beginners to understand. Lines of code read like human sentences, for example:

The concept paved the way for software that surpassed it such as wiki and Hopscotch.

HyperCard was a gateway to programming and was what first got me comfortable with the idea of coding. It’s probably not ridiculously hyperbolic to say that it inspired an entire generation of future software developers to think computationally. The developer of the original “wiki” software – the foundation for Wikipedia – was inspired by HyperCard. At least one of the current crop of Apple engineers also credit it for getting them into programming. And Samantha John, co-creator of children’s programming tool Hopscotch, says it inspired the software she’s helping to build.

Unfortunately, as many things do in tech, the HyperCard died out by 1998 when Apple stopped updating it and stopped selling it altogether in 2004. Arbesman called out some of the latest spiritual alternatives to HyperCard including Scratch, Glitch, and “bridging” tools like IFTTT and Zapier but, in his own words, “it’s time to go out and recapture that HyperCard feeling.”